What happened at COP22 in Marrakech? Four key themes

What happened at COP22 in Marrakech? Four key themes

Despite the lack of fanfare, very important progress was being made at COP22, the UN climate change conference, in Marrakech. Here’s our view from the ground on four of the major themes that came out strongly during the talks. 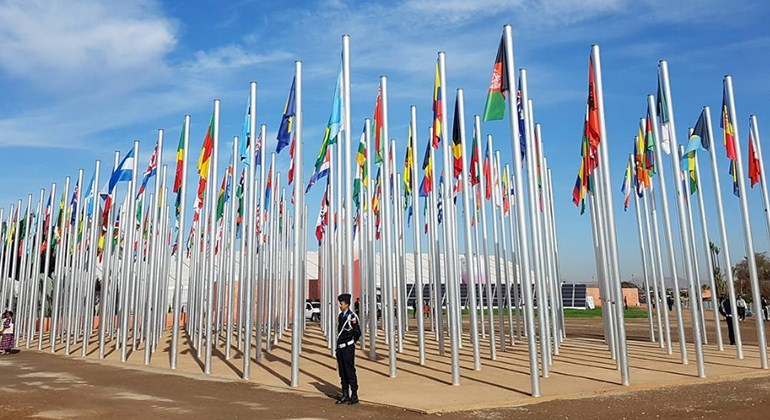 COP22 in Marrakech was never going to hit the headlines in the same way that the climate talks in Paris did last year. There was even less drama than there might have been thanks to the ratification of the Paris Agreement well ahead of schedule, making it one of the quickest ever international agreements to enter into force.

With commitments secured, the key issues on the table this year relate to the nitty-gritty of implementation and action. Given the other major global events taking place at the same time – not least a presidential election in the US – there was comparatively little attention given to the talks.

But despite the lack of fanfare, very important progress was being made. After all, the stakes are still incredibly high. The global risks from climate change are enormous. And the conference took place at the back end of what is expected to be the hottest year on record by some distance.

At the Carbon Trust, we were very busy in Marrakech, with a number of us participating at COP22 across the two weeks. After all, the details of implementation and action on climate change are our speciality. We hosted two side events: one on low carbon cities and the other on energy efficiency financing. We were also actively supporting progress on initiatives led by others, such as the World Bank’s new Climate Business Innovation Network.

Here’s our view from the ground on four of the major themes that came out strongly during the conference.

Of course the tremors from the seismic result of the US presidential election were felt in Marrakech. But although it may have left some feeling briefly unbalanced, the foundations for building a low carbon economy remain solid and stable.

This is a matter of market fundamentals, which in the case of Trump, can trump politics. The costs of renewables continue to plummet. There are huge economic benefits from improving the energy efficiency of industry. And electric vehicles have become an everyday sight on our roads, offering a welcome solution to the enormous air pollution challenges faced by many cities around the world.

Investment in new infrastructure will be critical, especially in developing countries. And there is good reason to believe that infrastructure will be low carbon. Clean technologies have become more attractive than the fossil-fuelled technologies of the past. And as we look through to 2020 and 2030 there is a positive business case for countries to follow through with their pledged emissions reductions.

There is still a major outstanding issue around the fact that current commitments are well below what is necessary to keep global warming below 2°C. The next opportunity for countries to formally discuss raising their levels of ambition through the current UN process will be 2018 at the earliest. But the Marrakech Action Proclamation that came out of COP22 reaffirmed the world’s unanimous commitment to urgently close this gap and push ahead with the momentum for action on climate change.

Everyone has a role to play

There is now overt recognition of the critical role being played by “non-state actors” in international progress on climate change. In part this is because they are moving far further and considerably faster than national governments. They are also moving together, through an increasing number of major coalitions and campaigns.

Progressive cities and regions are setting bold and ambitious targets. This includes the 165 jurisdictions across 33 countries that have come together through the Under2 MOU, that collectively represent over 1 billion people and US$25 trillion in GDP, around a third of the entire global economy.

Similarly, large businesses are signing up to initiatives such as the Science Based Targets Initiative, setting long-term goals and implementing strategies  to ensure that their own carbon emissions are in line with what the best available science says will be required to keep global warming well below 2°C. This ambition is significant as many of these global companies have supply chain emissions greater than the vast majority of countries taking part in the UN climate talks, so there is an enormous opportunity for them to have a positive influence and set expectations, helping cascade their own commitments to thousands of other businesses.

And it is worth recognising the important role that continues to be played by civil society and non-governmental organisations in keeping climate and sustainable development issues front of mind. Without their tireless advocacy, engagement and campaigning it is highly unlikely that we would be seeing even our currently inadequate levels of action. In some cases their work even enables governments to take practical action. For example, the World Resources Institute has created the NDC Partnership to provide tools, technical assistance and knowledge sharing for developing countries.

How can we create a global economy that meets the world’s needs in a sustainable and affordable way? How can we take carbon dioxide back out of the atmosphere later this century? How can we adapt to more frequent or severe droughts and floods, or rising sea levels? Many of the solutions we have today aren’t good enough, which means that our best response is investing in innovation.

To achieve a deep decarbonisation of the global economy we will need to focus innovation across three main pillars: a transformational approach to energy efficiency across all sectors; a nearly complete decarbonisation of power generation; and an electrification of transport and the introduction of other low carbon transport fuels. What is more, this all needs to be broadly complete within the next three decades. It is a monumental task.

It is not by any means a panacea, but unleashing ingenuity and creativity can deliver remarkable results. This is the hope behind the Mission Innovation initiative, which saw two new countries join in Marrakech: Finland and the Netherlands. That means that there are now 22 countries plus the European Union, that have pledged to double public R&D investment in clean energy technologies by 2020/21 to a collective total of around US$30 billion. COP22 was used as a platform to announce seven new innovation challenges under the initiative, ranging from sustainable biofuels to smart grids.

This is going to be matched by major private sector commitments. Particularly the Breakthrough Energy Coalition led by Bill Gates and other hugely wealthy investors such as Jack Ma and Ratan Tata. Although they did not have a major presence at COP22 it was announced that they will shortly be launching their fund for investing into new early stage clean technologies that have significant potential impact. As with Mission Innovation, it is difficult to predict what the impact of all this spending will be. But it is a good reason to be hopeful.

Money is still a major issue

One of the big areas of focus at COP22 was how we deliver the US$100 billion a year that has been pledged by 2020 to support developing countries. How this amount will be reached and then distributed continues to be an area of considerable debate and disagreement. In particular there are issues with how it will be allocated between spending on the mitigation of carbon emissions through low carbon infrastructure and helping countries adapt to the impacts of climate change.

However, even if these challenges are overcome, getting the money is only half the battle. There are huge challenges in making sure that it is spent in the right way. There are a number of things that are good, but not good enough.

When we are talking about building infrastructure with a lifespan measured in the decades, it is not enough for it to just be lower carbon than building a coal plant. It needs to be compatible with what is necessary to stay below 2°C – otherwise we will either fail to meet our goals on climate change or waste the money on projects that will need to be scrapped in future.

Finally, there is a still an open question on how we will fund getting to zero carbon. As it stands, there are certain investments into emissions reductions that make very good business sense, like solar electricity in hot, sunny places. Even if they are not necessarily being implemented at the scale that they should be, these will be the comparatively easy things to accomplish.

But not everything that we need to do on climate change will be a profitable investment. Some things will hurt. As Jeffrey Sachs made clear at the Low-Emission Solutions Conference taking place alongside the talks for the first time, there is no invisible hand of the market that will take us to zero carbon by the middle of this century. For some issues government will need to step in and regulate in order to deal with some of the more complex challenges.

Marrakech was another stepping stone on the precarious path we are following towards a sustainable, low carbon future. We have kept our footing and move onwards towards next year in Bonn, where Fiji will be the host. I have no doubt that it will be another busy year for the Carbon Trust, focusing on the practical solutions to climate change around the world. I hope that by the time COP23 rolls around that we will be able to see more tangible progress towards our goals.